Tangkuban Perahu is an active volcano  and has 2048m high, aournd 30km North of Bandung and 5km from previous point Ciater. It has 3 craters, which are: Kawah Ratu or Queen Crater, Domas Crater and Upas Crater. In our exploration, we only going to Queen crater, the biggest one.
Tangkuban Perahu itself means, in fact, "up-turned boat" or perahu terbalik. The shape of volcano has stimulated of the Sundanese people from early times as expressed in the Legend of Sangkuriang. 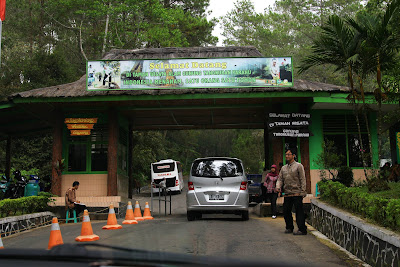 The way to Kawah Ratu is raising through the rain forest and little bit rocky. When we arrived, we were disappointed as the rain go down and we need to take a shelter on small cafe (warung indomie), and of course is a good time for indomie and hot coffee.  Alhamdulillah, the rain was gone just after we finish the meal :)

The Kawah Ratu has a huge hole with steamy pool on the center. The cliffs are beautiful and deep with the steam flow between it gaps. I tried to capture all parts as unity, but the crater is too big, my camera and 24-105mm are limited :D 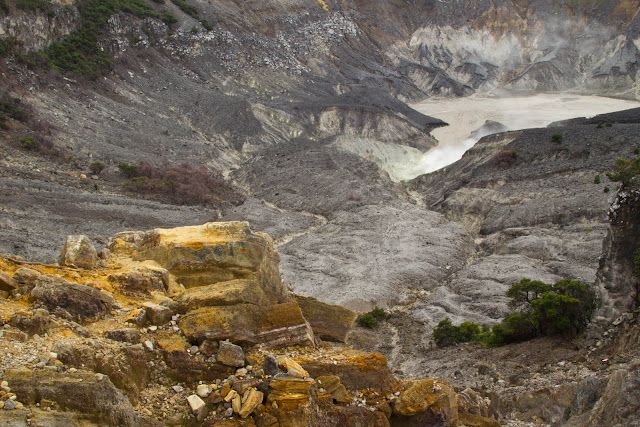 After satisfied exploring the front side of Kawah Ratu, we walked to the west end through some small shops that sells souvenir then continue with hiking on the forest. Many tourism around the shops but not many people goes to the west end which is the closest side to the center of eruption. 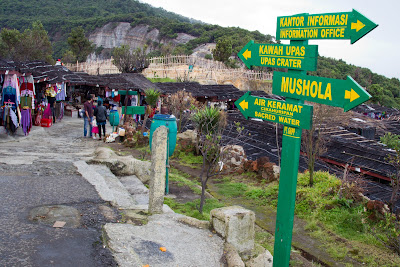 We took the way to the west edge by walk, its the only way, so tired but believe me its worthed. From the peak of the west edge, the view is amazing. One thing that made me little bit worry, the sound from the center from eruption like boiling water, or like there is a huge furnace under the eruption surface. We took not more than one hour on this great spot.
Since its already almost afternoon (3.30PM), we were asked by the guard or sapu bersih team to leave the west edge of the crater before afternoon. The guards were very nice as they were waited us patiently when we still trying to capture the view in our way back. They said that the poisonous gases sometimes accumulate at Kawah Ratu in the afternoon. 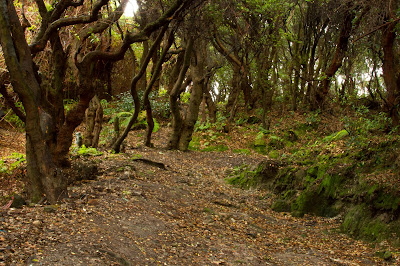 After this travelling, I founded some info about Tangkuban Perahu where this volcano was erupted on 1969 and was closed to the public for a few days because unusually high seismic activity in 1992. Currently the volcano is still active.
Posted by dinoerla at 4/16/2011 11:59:00 pm